Parents Beware of Live.Me it is a Dangerous Trap for Kids

There is a new dangerous app circling your kids sphere of influence…It is called Live.Me. 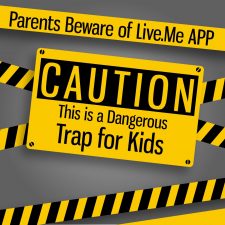 Live.Me is a social media platform designed for people to share live stream videos to their friends and followers. In a disturbing report from Fox News 32, we can see that young girls (as early as 10 years old) are using the social media platform to promote sexual behaviors. They are dancing provocatively, stripping, and asking followers what they want to see next. The young girls are being rewarded by virtual currency, bombarded with validating comments, and asked to do more. “It is a pedophiles paradise…”, says Bill Melugin, Fox Reporter. Men twice their age are asking these young girls to do sexual acts and strip on the live stream. Live.Me also allows viewers to comment directly to the live stream, and they start coaxing these young girls with sexual requests.

Children don’t understand the consequences of their actions, they don’t know how to resist the virtual pressure, and they might not cognitively understand what they are doing. All they see is the flux of demands, and they fold to the pressure. The comments come in so fast, building off each other, adding pressure to conform to the demands, sending virtual currency, and validating comments to get these young girls to fold. Sadly, a lot of them end up doing something inappropriate, being caught up in the moment and pressured by their followers…all wanting just a little more. Thrill-seeking, the high of so much validation, and the risk-taking behavior kicks in, leaving your child exposed.

Live.Me has been downloaded over 96 million times. It is a live streaming app that pins users locations and allows users to see who is streaming near them. Your kids can see who is near them live streaming and also be prey to the predators lurking on the app. This is extremely dangerous and creating a platform of sexual risk-taking behaviors for girls as early as 10 years old. So please take the time to talk to your children tonight, check their phone, and educate them on the danger of Live.Me.

Here are some tips to talk to your kids about the danger of Live.Me:

Here are some more articles about the dangers of Live.Me:

CBC report: By the End My Daughter Was Naked
BBC: A Teenager’s Life Ruined by Live.Me
The Times: The app that exposes your children’s home address…

With a heavy concerned heart, we plead that you talk to your children about Live. Me. Please reach out to us for any resources or tips. We are here to support our educators and parents.